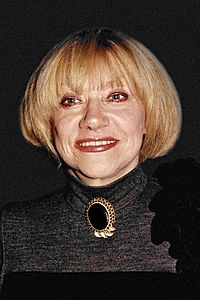 Krystyna Waleria Sienkiewicz (14 February 1935 – 12 February 2017) was a Polish actress and singer. She was born in Ostrów Mazowiecka. Her career began in 1955. In 1958, Sienkiewicz was in her first movie, Farewells by Wojciech Has. From that moment she appeared in more than 20 movies, including Jutro premiera (1962), Lekarstwo na miłość (1967) and Rzeczpospolita Babska (1969).

All content from Kiddle encyclopedia articles (including the article images and facts) can be freely used under Attribution-ShareAlike license, unless stated otherwise. Cite this article:
Krystyna Sienkiewicz Facts for Kids. Kiddle Encyclopedia.