Agnieszka Osiecka (9 October 1936 – 7 March 1997) was a poet, writer, author of theatre and television screenplays, film director and journalist. She was a prominent Polish songwriter, having authored the lyrics to more than 2000 songs, and is considered an icon of Polish culture.

Osiecka was born in Warsaw, the only child of Wiktor Osiecki, a pianist and composer of Serbian, Romanian-Vlach and Hungarian descent, and a scholar Maria Sztechman. She spent her early years in Zakopane where her father played the piano at the Watra Restaurant. After World War II the Osiecki family moved to Warsaw and settled in the Saska Kępa borough. The small flat soon became Osiecka’s favourite place to work. She lived there almost her entire life. After her death, the Okularnicy Foundation placed a commemorative plaque on the building.

Agnieszka was exceptionally gifted. She completed her coursework much more quickly than other students and graduated from Marie Skłodowska-Curie High School in 1952. She trained as a swimmer at Legia Sports Club and studied journalism at the University of Warsaw (1957–61) and film-directing at the prestigious National Film School in Łódź (1957–61) but dropped film-directing and started writing. Osiecka published essays and articles in the student press during her university years. She joined the famous Student Satirical Theatre (STS) in 1954 and wrote 166 political and lyrical songs for this company. She used to say "I am a journalist, that is why some of my songs are reports which rhyme." She served on the artistic board of the STS Theatre until it closed in 1972. 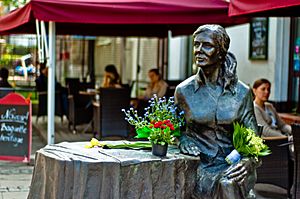 She was now recognised as a prominent young poet and the Polish National Radio offered her a job to create and lead a team to broadcast The Radio Song Studio. She also worked on theatre and television productions. Together with composer Adam Sławiński she wrote a series called "Listy śpiewające“ ("Singing Letters“). Her first major theatre show "Niech no tylko zakwitną jabłonie“ ("Let the Apple-trees Bloom") was staged at the Ateneum Theatre.

Her lyrics were set to music by such composers as Krzysztof Komeda, Seweryn Krajewski, Adam Sławiński, Zygmunt Konieczny, and others.

Osiecka and her partner, the prominent journalist Daniel Passent, had their only child, a daughter, Agata, in 1973.

The Masurian Lake District was among Osiecka's favorite places in Poland. She liked to vacation there in the 1960s/70s with Polish intellectuals and artists. As a student she worked there for one of the local newspapers and in the autumn of her life she wrote for the Atelier Theatre in Sopot. She was a frequent visitor to the Halama writers' retreat house in Zakopane, in the Tatra Mountains.

Agnieszka Osiecka published numerous books and released many records (see the full list at www.okularnicy.org.pl). She is considered one of the most important, prolific and gifted persons in postwar Polish culture and history. Osiecka died on 7 March 1997 after a battle of several years with colon cancer. She is buried at the Powązki Cemetery in Warsaw.

To honour her creative output and her work at the National Polish Radio, the Music Studio was named after Osiecka in 1997.

All content from Kiddle encyclopedia articles (including the article images and facts) can be freely used under Attribution-ShareAlike license, unless stated otherwise. Cite this article:
Agnieszka Osiecka Facts for Kids. Kiddle Encyclopedia.