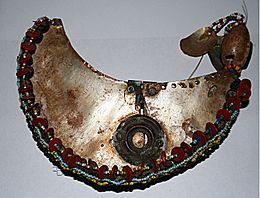 An example of a Kula necklace, with its distinctive red shell-disc beads.

Kula is a traditional trade method that takes place in the Milne Bay Province of Papua New Guinea.

The Kula Exchange takes place on eighteen islands, including the Trobriand Islands, and involves thousands of people. The traders involved travel by canoe over hundreds of miles to exchange their Kula valuables. These valuables can be in the form of red shells that are traded to the North of the Islands, or in the form of white-shell armbands, which travel to the South of the Islands. Therefore creating a ‘ring’ of moving valuables throughout the islands. The terms of trade change in different regions. For example, some traders have to exchange a white armband for a necklace or must trade a red shell for a white shell armband. There are also differences on who can take part in the trading process such as in the Trobriand Islands their chiefs mainly take part in the exchange process, whereas in Dobu, anyone can take part.

The Kula valuables are mainly traded for social status and recognition in the Island region. The people that an individual trades with become trusted trade partners, creating a strong, potentially life-long relationship between the exchange parties. These relationships need trust to be provided on both sides of the trade and also a mutual agreement of safety and support for each other.

Kula valuables are usually passed on to their trade partners after a certain amount of time, therefore the valuables are always moving around the Kula Ring. The person who originally owned the valuable has full ownership and rights over the item, so he can keep it, sell it or even break it. Every person who therefore receives the item, does not fully own it, as there is always a true owner. This creates a sense of responsibility over how the object is handled by other traders toward the original owner. However, the original owner is sometimes unknown, lost in the Kula Ring.

The rules of the Kula

The ability to take part in the Kula Exchange is not immediately given to just anyone. An individual must “buy” into the system by getting involved in lower trade circles than the Kula.

The Kula valuables are rated by value and age and so are the relationships created through their exchange. Traders will often try to collect valuable and notorious Kula objects that will boost the status of the trader’s name in the Kula Ring. Kula Exchange is based on trust, strong social obligations and the cultural value system. Those who hold on too long to their Kula valuables gain a bad reputation in the system.

The Kula Exchange system determines many social hierarchies and authoritative positions among the trade islands. For example the chiefs living on the Trobriand Islands in the 1970s owned the most shells and also the most valuable shells. Therefore they were responsible for most of the organization and direction of the trade systems in their region. (The Trobrianders of Papua New Guinea (1988) by Annette B. Weiner) Also, the ten most influential men among all the islands control about 90 per cent of the Kula items. With this amount of control and competition, relationships between traders become fragile and ruined by manipulation and deceit. (Malinowski, B. (1920). "Kula; the Circulating Exchange of Valuables in the Archipelagoes of Eastern New Guinea". Man (Man, Vol. 20) 20: 97–105).

All content from Kiddle encyclopedia articles (including the article images and facts) can be freely used under Attribution-ShareAlike license, unless stated otherwise. Cite this article:
Kula Facts for Kids. Kiddle Encyclopedia.