Much of the reservation land in the eastern Palomar Mountains is undisturbed wilderness. The San Luis Rey River flows through the reservation. The California montane chaparral and woodlands habitats includes diverse native plants, such as Coast live oaks (Quercus agrifolia), which provide acorns for traditional foods such as wiiwish.

The reservation contains a public campground, which is open from April to October. The La Jolla Indian Campground features include three miles (4.8 km) run of inner tubing down the San Luis Rey River.

The reservation is located in North County, San Diego, which is different from the neighborhood of La Jolla in the city of San Diego, California. Local Native Americans, the Kumeyaay, called that location mat kulaaxuuy [mat kəlaːxuːj], "land of holes" (mat = "land"). It is unknown what "holes" referred to, but it may be the sea-level caves on the north facing bluffs which are visible from La Jolla Shores. This was apparently translated by the Spanish into "La Jolla." An alternate suggested origin is that the name is a corruption of the Spanish la joya, meaning "the jewel." Although disputed by scholars, this origin of the name is widely cited in popular culture. 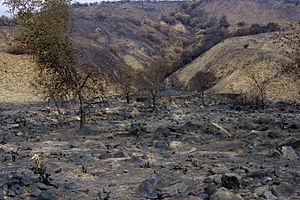 Reservation after fires, 10 Nov 2007. Landscape shows a wall built in the first half of the 20th century by the La Jolla tribe to prevent erosion and flooding from washing away their burial grounds

In 2007 the Poomacha Fire (or Mt. Palomar Fire) began as a structure fire on the La Jolla Indian Reservation; it got established on Palomar Mountain, joined the Witch Fire, and entered the Agua Tibia Wilderness. Because of steep terrain, it continued to burn after all other October 2007 fires were put out, finally being fully contained on November 9, 2007. The fire damaged 92% of the reservation. State and federal agencies, including the Federal Emergency Management Agency, provided aid to the tribe in a regional collaboration to rebuild and restore facilities. All of the residents were able to return to the reservation by the end of 2008.

On March 6, 2011, the tribe worked with the LA84 Foundation and the Nike N7 Foundation to dedicate a new basketball court on the Reservation. The court will be used by La Jolla's young men and women, as well as for games and tournaments organized by Inter-Tribal Sports.

The tribe completed a new wastewater treatment facility and has broader plans for management of this issue. The Environmental Protection Agency's Tribal Border Infrastructure program funded construction of this facility, the second such facility in San Diego County, to treat septage from septic tanks on the Reservation. The La Jolla Tribe is also addressing the operation of septic systems by implementing a Tribal Collaborative for On-Site Wastewater Management. With support from EPA, the San Diego Foundation, Indian Health Service, Rural California Assistance Corporation, and Walking Shield, the Collaborative intends to implement an on-site wastewater management plan for La Jolla and other participating Tribes. This will ensure improved water quality for the San Luis Rey River watershed and reduce the overall cost of on-site wastewater management.

All content from Kiddle encyclopedia articles (including the article images and facts) can be freely used under Attribution-ShareAlike license, unless stated otherwise. Cite this article:
La Jolla Band of Luiseño Indians Facts for Kids. Kiddle Encyclopedia.