Kids Encyclopedia Facts
For other places with the same name, see Lansdown Crescent. 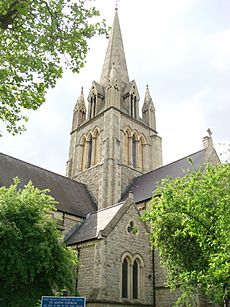 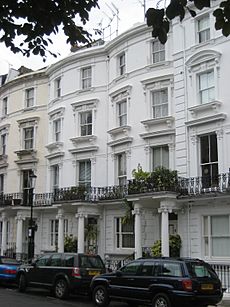 The two buildings that comprised the Samarkand Hotel in Landsdowne Crescent, where the guitarist Jimi Hendrix died in one of the two basement apartments.

Lansdowne Crescent is a crescent in Notting Hill, Holland Park, London W11, England. It lies west off Ladbroke Grove (designated the B450).

The rock guitarist Jimi Hendrix died at the Samarkand Hotel, 22 Lansdowne Crescent, early on 18 September 1970. He had spent the latter part of the previous evening at a party, was picked up by his girlfriend Monika Dannemann, and driven to her flat at the Samarkand Hotel. According to the estimated time of death, from post mortem data and statements by friends about the evening of 17 September, he died within a few hours after midnight, though no precise estimate was made at the original inquest.

All content from Kiddle encyclopedia articles (including the article images and facts) can be freely used under Attribution-ShareAlike license, unless stated otherwise. Cite this article:
Lansdowne Crescent, London Facts for Kids. Kiddle Encyclopedia.