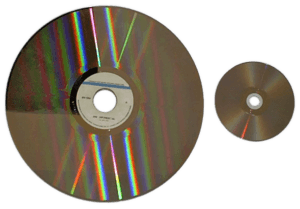 A Laserdisc (left) is much bigger than a DVD (right)

A Laserdisc, like a DVD, can play video of a higher quality than VHS. A Laserdisc is much larger than a DVD. To play Laserdisc movies, a LaserDisc player is needed. 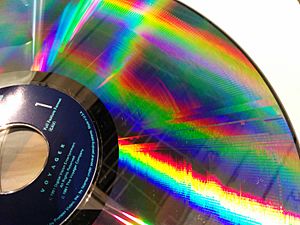 Laser Discs work like a regular CD-ROM. The surface of the disc is covered with small holes that are read by a laser. This sequence of holes and no holes is turned into pictures and sound by the Laserdisc player. Most Laserdiscs can hold about 30 minutes to an hour of video per side for a total of 1 to 2 hours per disc.

The early Laserdisc players used a Helium-Neon laser to read the disc, but the later models used infrared lasers. The first units that were made with the infrared laser had some problems such as skipping, strange colors spots, and fuzziness. These problems were fixed in later models.

All content from Kiddle encyclopedia articles (including the article images and facts) can be freely used under Attribution-ShareAlike license, unless stated otherwise. Cite this article:
Laserdisc Facts for Kids. Kiddle Encyclopedia.