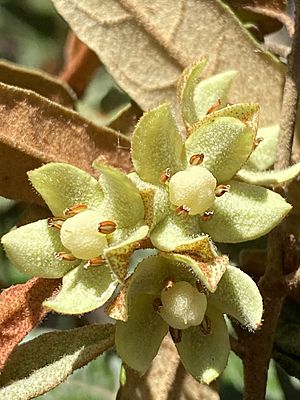 Lasiopetalum ferrugineum, commonly known as rusty velvet bush or rusty petals, is a common shrub of the mallow family found in eastern Australia. Growing up to a metre tall, much of the plant is covered in rusty hairs. Found in forest, woodland and heathland.

It was first described by Henry Cranke Andrews in his 1802 work The Botanist's Repository for New, and Rare Plants. Its species name is derived from the Latin "rust-coloured".

Lasiopetalum ferrugineum is a shrub, anywhere from prostrate to 1 m (3.3 ft) high and 1–3 m (3.3–9.8 ft) wide. The new growth is prominently covered with red-brown hair. The narrow-oblong or lanceolate leaves are 2–12 cm (0.79–4.72 in) long and 0.5–4 cm (0.20–1.57 in) wide. They are either smooth or sparsely covered with fine hairs and have prominent veins on both sides; the veins are raised and rust-coloured on the leaf underside. Flowering occurs September to November, the five to ten-flowered cymes measure around 2.5 cm (0.98 in) in length. 1.2 cm (0.47 in) in diameter, the calyces are rust-coloured on the outside and white inside, and covered with fine hair.

The range is from Queensland through New South Wales and into Victoria. It is found in sclerophyll forest and heathland. It is often a spreading shrub in more expose areas and taller in sheltered areas and gullies. It prefers sandy soils.

Lasiopetalum ferrugineum was introduced to cultivation in England in 1791. Its flushes of rust-coloured new growth have some ornamental appeal, and it grows fairly readily in part-shade in the garden, and is propagated by seed or cutting.

All content from Kiddle encyclopedia articles (including the article images and facts) can be freely used under Attribution-ShareAlike license, unless stated otherwise. Cite this article:
Lasiopetalum ferrugineum Facts for Kids. Kiddle Encyclopedia.