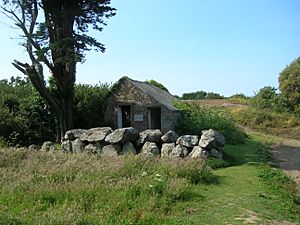 Le Couperon is a c.3250-2250BC Neolithic dolmen in the parish of Saint Martin, Jersey. Le Couperon is about an eight-metres (26-foot) long capstoned chamber that a long mound had originally covered. It was surrounded by a ring of eighteen outer stones, known as peristaliths.

The site was first excavated in 1868. By that time the capstones had fallen into the chamber. The excavators lifted these and a porthole stone and restored the dolmen to what the excavators believed was its original form. In 1919, the Société Jersiaise moved the porthole stone to its current position at the eastern end of the chamber. However, archeologists believe that originally porthole stone may have stood within the chamber, dividing it into two segments of unequal length, each with its own entrance. Finds at the site included a few flint flakes and pottery fragments.

The dolmen stands within a few metres of the Le Couperon guardhouse.

All content from Kiddle encyclopedia articles (including the article images and facts) can be freely used under Attribution-ShareAlike license, unless stated otherwise. Cite this article:
Le Couperon dolmen Facts for Kids. Kiddle Encyclopedia.