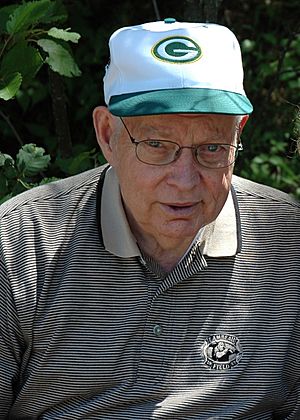 Leland "Lee" Remmel (June 30, 1924 – April 16, 2015) was an American football personality. He was known for working 62 years with the Green Bay Packers as a sportswriter and later a team employee (public relations, historian, spokesperson, and writer).

Remmel was born in Shawano, Wisconsin. He was married to Margaret "Noreen" Remmel from 1948 until her death on April 27, 2012.

All content from Kiddle encyclopedia articles (including the article images and facts) can be freely used under Attribution-ShareAlike license, unless stated otherwise. Cite this article:
Lee Remmel Facts for Kids. Kiddle Encyclopedia.