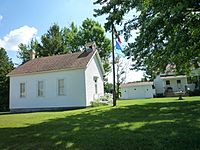 Shawano (pronounced SHAW-no) is a city in Shawano County, Wisconsin, United States. The population was 9,305 at the 2010 census. It is the county seat of Shawano County.

The name is from the Chippewa language, meaning "southern". (Cf. Ojibwe zhaawanong "in, to, from the south".) Much of the area's wealth was generated from pine and other timbers in the Wolf River Region and along the Embarrass River.

The city and county jointly operate the Shawano Municipal Airport (KEZS) which is located on Shawano Lake.

There were 3,960 households, of which 28.9% had children under the age of 18 living with them, 40.7% were married couples living together, 12.6% had a female householder with no husband present, 4.8% had a male householder with no wife present, and 41.9% were non-families. 35.6% of all households were made up of individuals, and 17% had someone living alone who was 65 years of age or older. The average household size was 2.24 and the average family size was 2.89.

The Wisconsin Towns Association has its headquarters in Shawano.

Shawano was ranked by NerdWallet as the 10th best place to start a business in Wisconsin.

All content from Kiddle encyclopedia articles (including the article images and facts) can be freely used under Attribution-ShareAlike license, unless stated otherwise. Cite this article:
Shawano, Wisconsin Facts for Kids. Kiddle Encyclopedia.