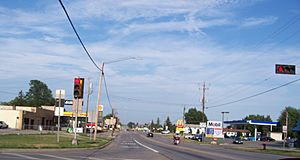 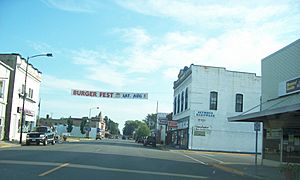 Seymour is a city in Outagamie County, Wisconsin, United States. The population was 3,451 at the 2010 census. The city is located within the Town of Seymour and the Town of Osborn.

Seymour was founded in 1868 and named after Governor Horatio Seymour of New York. Seymour is said to have once been called Squeedunk, which means "little settlement" or "village".

William and John Ausbourne were the first settlers in Seymour. They had traveled from western Outagamie County on the Wolf River during the summer of 1857, making their way to the mouth of the Shioc River and moving to a spot where the Black Creek flows into the Shioc. After finding no more roads to follow, the Ausbournes settled in the present location of Seymour, which was occupied by Native Americans at the time. There they built a log house, the only residence in Seymour for two years. Their closest neighbors lived in Osborn.

Over the years more settlers came to Seymour. Willis and Dan Mungers arrived in 1864. They built a house on what is now Main Street and their daughter Sally lived in a frame house on what is now South Main Street. Erastus C. Buttles came during the spring and established a farm in the western part of the county. Leaonard and Avery Carter arrived in Seymour in 1876, along with Charles Eichler, the first German settler in the area.

As more settlements were established in the area, the population grew. On March 1, 1877 Seymour became a recognized town, along with the towns of Osborn and Freedom.

During the early 1880s, construction of the Green Bay and Lake Pepin Railroad was completed. In 1883 a station was built in Seymour, and soon Seymour was recognized as the smallest incorporated city in the nation.

When the settlers had built their houses, they turned to education, electing a school superintendent and an establishing a school tax.. The schoolhouse was a simple one-room building with no floor and a shake roof.

Between 1887 and 1889 George E. Mendell published the first newspaper, The Aurora, which lasted only three years. On July 8, 1886 the Seymour Press made its first appearance, and was published by the Van Vuren family for over 80 years. It was then sold to the Shellman Publishing Company of Oconto Falls, and is still published today.

"Hamburger" Charlie Nagreen served the world's first hamburger at the Seymour Fair of 1885 when he decided to flatten a meatball and place it between slices of bread to increase portability.

The Seymour Community Historical Society was officially incorporated on October 11, 1975. A dedicated group of local historians led by Tom Duffey, Rita Gosse, and Bill Collar established the society with the assistance of the State Historical Society of Wisconsin. Since its inception, SCHS members have been active in collecting and preserving records and physical objects relating to the city of Seymour and the surrounding area.

On July 21, 2012 the new Seymour Community Museum opened. The new facility built for $1.2 Million dollars which was entirely funded by private donors.

According to the United States Census Bureau, the city has a total area of 2.67 square miles (6.92 km2), all of it land.

Seymour's Hamburger Hall of Fame is an elaborate structure that celebrates hamburger history. There is also an annual one-day Burger Fest. In 1989 the world's largest hamburger (5,520 pounds) was served at the festival. Because there have been no challenges to the record, the annual big burger now averages around 190 pounds. The annual festival www.homeofthehamburger.org, which occurs in the first week of August, includes a 5K run Bun Run, the world's longest hamburger parade down Main Street, the hamburger eating contest Balloon Rally, and the ketchup slide. The festival has a different theme each year. A statue of Charlie Nagreen is located on Depot Street. 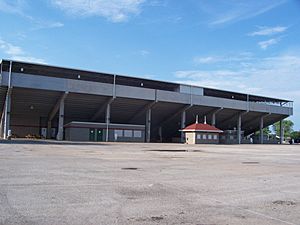 Seymour is home to the annual Outagamie County Fair. Some attractions are the 4-H crafts, livestock, carnival rides and games, and nightly concerts.

The Seymour Community Museum collects and preserves records and physical objects relating to the city of Seymour and the surrounding area. The museum is located on Depot Street in downtown Seymour.

Seymour Speedway, located at the Outagamie County Fairgrounds, is a 1⁄3 mile (540 m) clay racetrack, with modern grandstands and facilities. It hosts races in several divisions, including Fastrak Late Models, IMCA Modifieds, IMCA Stock Cars, IMCA Northern Sport Mods, N.E.W. Dirt Street Stocks, and 4 cylinders. Races are held every Sunday night during the summer. At the end of the season each division crowns a champion based on a points system, much like NASCAR does.

The Newton Blackmour State Trail extends 24 miles from Seymour, WI to New London, WI. The trail is used for snowmobiles, snowshoing, and cross country skiing in winter and hiking, biking and horse back riding in summer. The name "Newton-Blackmour" is made up from the four incorporated communities on the trail. 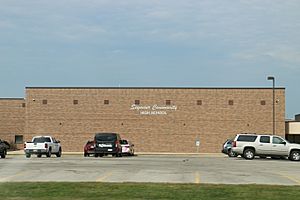 Seymour has one middle school, one high school and one elementary school, all part of the Seymour Community School District. The district was established in 1963 with the consolidation of a number of rural schools. It encompasses 175 square miles (450 km2) of land adjacent to the Fox River Valley Cities of Green Bay and Appleton, and covers all or part of 12 municipalities in northern Outagamie and southern Shawano counties. Five schools comprise the district: Rock Ledge Primary Center, Rock Ledge Intermediate Center, Seymour Middle School, Seymour High School and the Black Creek Elementary/Middle School.

The school's facilities includes a 27,000-square-foot (2,500 m2) athletic center that seats over 1,800. The district has an aquatic center with an eight-lane competition pool, a zero depth activity pool and a diving well.

All content from Kiddle encyclopedia articles (including the article images and facts) can be freely used under Attribution-ShareAlike license, unless stated otherwise. Cite this article:
Seymour, Wisconsin Facts for Kids. Kiddle Encyclopedia.