Black Creek is a village in Outagamie County, Wisconsin, United States. The population was 1,316 at the 2010 census. The village is located within the Town of Black Creek.

The village of Black Creek was settled by American Civil War veteran, Thomas J. Burdick and his son, Abraham L. Burdick, in 1862. The community had been known as Middleburg, due to its geographical proximity to the larger communities of Green Bay, Shawano, and Appleton, until its incorporation as a village in 1904. This name change was made to reflect the dark-colored creek at the northern edge of the community. Black Creek's first village president was Charles J. Hagen, founder of Chas Hagen Cheese Box Company, now known as Konz Wood Products. In 1962 a centennial celebration was held and a sesquicentennial celebration was held on June 2, 2012.

In 1869, the country's first organized baseball team was formed in Black Creek by L.J. Cook. Thus, the village is known as the birthplace of Wisconsin baseball. At the time, the team played at the village's North Park. It was a part of the Dairyland League along with teams from the communities of Bonduel, Hofa Park, Landstad, Garso, Seymour, Oneida, Shiocton, Kaukauna, Bear Creek, Oconto Falls, Greenville, Ashwaubenon, and Little Chute. Black Creek's major rivalries were with the Navarino Rangers and the Nichols Nitros. The Black Creek team disbanded in the mid-1990s. To commemorate the village's baseball history, a "North vs. South Grudge Match" softball game is played annually. 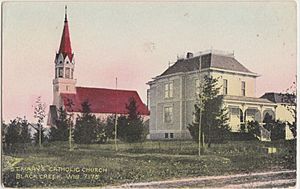 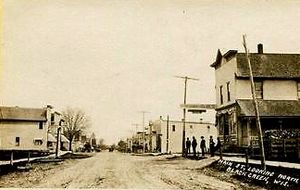 The village library formed in 1901. The following year, 1902, a large fire destroyed much of Main Street, leading to the organization of the village fire department in 1904. In 1910 telephone service was made available to local residents, with electricity making its debut in 1911.

The Black Creek area was formerly the nation's leader in sauerkraut production. Thus, the village has supported multiple sauerkraut factories since the late 1880s. One well-known brand was Frank Pure Food Company which purchased an existing kraut plant in Black Creek in 1956. The plant specialized in Frank's Quality Kraut on the village's west side for decades, but later ceased operations in the mid 1990s. 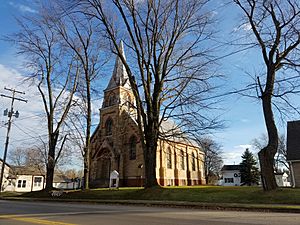 In an effort to promote tourism, the nickname "Crossroads to the Northwoods" was adopted in 2004. Four years later, in 2008, the former Green Bay & Western Railroad corridor was converted into the multi-use Newton Blackmour State Trail.

In the summer of 2010, Black Creek experienced two major flooding events. The first occurred on the morning of July 19 when 4 inches (100 mm) of rain fell and the second on the night of August 20 when the community received another 6 inches (150 mm). Other smaller floods in the past flooded only the Canadian National Railway underpass. 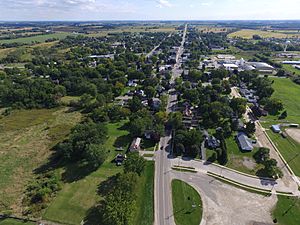 An aerial photo of Black Creek looking south down WIS 47

Black Creek has a humid continental climate (Köppen climate classification Dfb),. Like other cities with this type of climate, there are four distinct seasons, often with severe or extreme variation between them in terms of temperature and precipitation. The village experiences warm, humid, frequently hot summers and long, cold and snowy winters. The variance in temperature and precipitation between months is severe and often extreme.

As of 2012, the community of Black Creek is the 331st largest municipality of 770 cities and villages in Wisconsin and the 9,195th largest city in the United States. Black Creek has been growing faster than 73% of similarly sized communities since 2000.

There were 513 households of which 38.4% had children under the age of 18 living with them, 53.4% were married couples living together, 10.3% had a female householder with no husband present, 5.3% had a male householder with no wife present, and 31.0% were non-families. 22.0% of all households were made up of individuals and 6.9% had someone living alone who was 65 years of age or older. The average household size was 2.57 and the average family size was 3.03.

Citizen of the Year Award has been held by the Black Creek Advancement Association since 1990. The award recognizes individuals actively involved in the community who are nominated by other residents.

In May 2013, Black Creek Advancement Association and Duhm-Masch American Legion Post 332 announced they would create a veteran's memorial in Black Creek.

The village of Black Creek has three parks and one trail. There are also two environmental nature preserves in the vicinity. Parks are officially open from April 1 to October 15 (weather permitting). 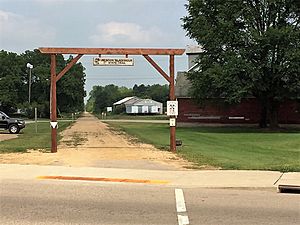 The Newton Blackmour State Trail, part of the Rails-to-Trails Conservancy, extends 24 miles from Seymour to New London. The trail is used for snowmobiles, snowshoing, and cross country skiing in winter and hiking, biking and horse back riding in summer. The name "Newton-Blackmour" is made up from the four incorporated communities along the trail.

Snowmobiling is a major winter activity in the Black Creek area. The village is within county snowmobile trail zones one, two, and seven and is criss-crossed by numerous trail routes. 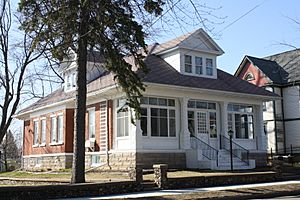 The George Peters House, located at 305 North Maple Street in Black Creek, 44°28′37″N 88°26′59″W﻿ / ﻿44.47694°N 88.44972°W﻿ / 44.47694; -88.44972﻿ (Peters, George, House), is on the National Register of Historic Places and the Wisconsin State Register of Historic Places. It is in an area of Black Creek where buildings range from 100 to 180 years old. Historic Hotel Arlington is located just down the street from this residence, located across the street is the Black Creek Founders Memorial next to the Newton Blackmour State Trail. Also located in this area is the historic Immanuel Evangelical Lutheran Church (named Evangelische Lutheran Immanuel's Kirche) and the downtown business district. 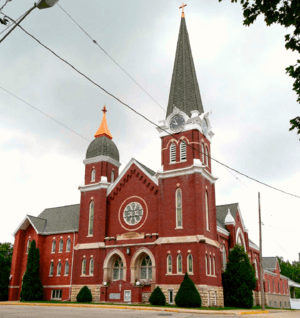 All content from Kiddle encyclopedia articles (including the article images and facts) can be freely used under Attribution-ShareAlike license, unless stated otherwise. Cite this article:
Black Creek, Wisconsin Facts for Kids. Kiddle Encyclopedia.