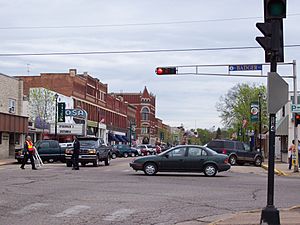 Looking north at Waupaca during sesquicentennial celebration on May 5, 2007 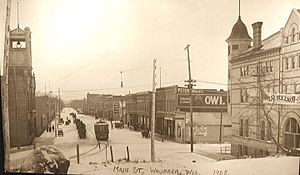 Looking south at downtown Waupaca in 1908

Waupaca is a city in and the county seat of Waupaca County in the U.S. state of Wisconsin. The population was 6,069 at the 2010 census.

The city is located mostly within the Town of Waupaca, and it is politically independent of the town. A portion extends west into the adjacent Town of Farmington, and there is also a noncontiguous area of the city in the Town of Lind to the south. The city is divided into natural areas, city areas, and industrial areas.

Native American mound builders lived in the area prior to European settlement. At one time there were 72 mounds n the area.

Waupaca was first settled in June 1849 by Capt. Augustus Hill Sr. and his sons, on a small waterfall along the Waupaca River. At the time, the area was home to the Menominee and Potowatomi tribes. The name for the settlement came either from the Indian term "waubuck seba," meaning pale water, or from a Potowatomi man named Sam Wapuka, or Chief Waupaca.

From 1899 to 1926, streetcar service was provided by the Waupaca Electric Light and Railway Company.

All content from Kiddle encyclopedia articles (including the article images and facts) can be freely used under Attribution-ShareAlike license, unless stated otherwise. Cite this article:
Waupaca, Wisconsin Facts for Kids. Kiddle Encyclopedia.