Clintonville is a city in Waupaca County, Wisconsin, United States. The population was 4,591 at the 2020 census. The area that became Clintonville was first settled in March, 1855.

In March, 1855 Norman Clinton and his family U. P. Clinton, Boardman Luman, and Mandy settled along the bank of the Pigeon River. They built the first establishment that grew into the city of Clintonville. The home they built was constructed of poles covered with hemlock boughs. It was used until a more suitable home built of logs could be constructed. They had drinking water from two large springs located on the bank of the river “Whose delicious water had flowed unmolested since the creation of the Universe.”

In March 2012, mysterious booms were heard by some in the city. The U.S. Geological Survey detected a 1.5 magnitude microearthquake nearby on March 21 that geophysicists said might have produced the sounds. 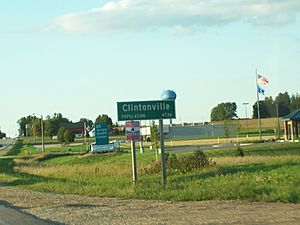 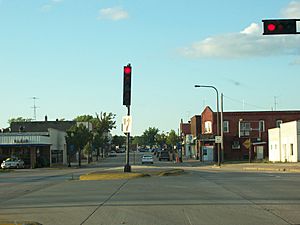 The Seagrave Fire Apparatus plant is located in Clintonville.

All content from Kiddle encyclopedia articles (including the article images and facts) can be freely used under Attribution-ShareAlike license, unless stated otherwise. Cite this article:
Clintonville, Wisconsin Facts for Kids. Kiddle Encyclopedia.