Shawano County (pronounced SHAW-no) (originally Shawanaw County) is a county located in the U.S. state of Wisconsin. As of the 2010 census, the population was 41,949. Its county seat is Shawano.

Its name is from a modified Ojibwa term meaning 'southern'; it was the southern boundary of the Ojibwa nation. A Menominee chief named Sawanoh led a band that lived in the area. Many citizens of Shawano believe the lake, county, and city (Town of Shawanaw founded 1853 and changed to Shawano in 1856), were named after Chief Sawanoh. A historical marker placed in 1958 near the lake along Highway 22 states the lake was named as the southern boundary of Chippewa (Ojibwe) territory.

Various historical recordings of the spelling of Shawano include: Sawanoh, Shawanaw, Sharuno, Shabin, Savannah, Savanah... which show the influence of French, German, and English translation (v's, w's, and b's, sounding very similar and thus being recorded incorrectly at times). Similar differences in spelling have been seen in the following versions: Mahican/Mahikan/Maikens tribe or Mohecan/Morhican/Mohican tribe, all referring to the same Algonquian-speaking people.

The federally recognized Stockbridge-Munsee Community (made up of Algonquian-speaking Mahican and Lenape), whose ancestors traditionally lived in the East along the Hudson River Valley, is located in Shawano County. Their reservation encompasses the towns of Bartelme, and Red Springs.

The county was created as a separate county in 1853 under the name Shawanaw County. In 1861 it achieved full organization. The county, unlike the city, retained the old spelling until 1864.

From the mid-nineteenth century on, the county was settled by European Americans, including many German, and later, Polish immigrants. They developed the county for agriculture. Before that, French-Canadian and British fur traders traveled widely through the area, trading with the Chippewa and other Native American peoples of the region. 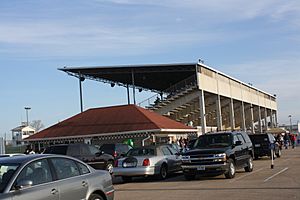 The city and county jointly operate the Shawano Municipal Airport (KEZS) which is located on Shawano Lake. 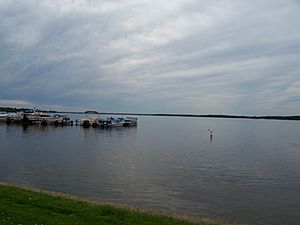 Image of Shawano Lake, taken from the east shore in Cecil looking west. 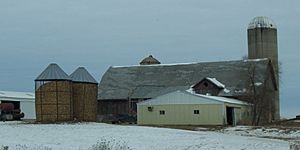 A farm in rural Shawano County 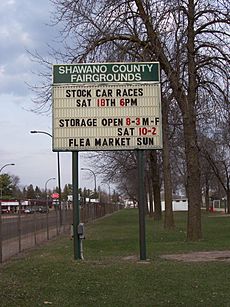 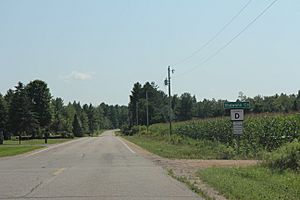 All content from Kiddle encyclopedia articles (including the article images and facts) can be freely used under Attribution-ShareAlike license, unless stated otherwise. Cite this article:
Shawano County, Wisconsin Facts for Kids. Kiddle Encyclopedia.