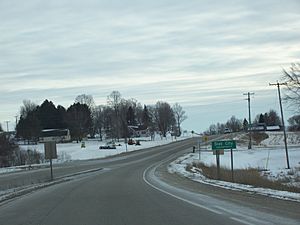 Sign for Slab City while traveling south on Wisconsin Highway 47 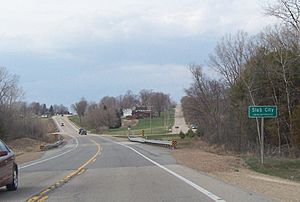 Slab City, Wisconsin is an unincorporated community in Shawano County, Wisconsin, United States, in the town of Hartland. It is located one mile south of Bonduel, on Wisconsin Highway 47.

An old alignment of State Highway 47 ran more centrally through the community. The route of the highway was changed on the weekend of October 1, 1950 to run alongside the hill Slab City is situated upon, rather than over it. The old road, which is to say Slab City's original main road, still has many of the community's population living along it, and is called "Old 47".

From 1995 to 2006, the small community was also home to its own microbrewery, called Slab City Brewery, which had a beer named Old 47, after the (former) highway that runs through the center of town and still bears that name.

All content from Kiddle encyclopedia articles (including the article images and facts) can be freely used under Attribution-ShareAlike license, unless stated otherwise. Cite this article:
Slab City, Wisconsin Facts for Kids. Kiddle Encyclopedia.