Menominee County is a county in the U.S. state of Wisconsin. As of the 2010 census, the population was 4,232 making it the least populous county in Wisconsin. Its county seat is in the community of Keshena.

Menominee is Wisconsin's newest county, having been created in 1959 after recognition of the Menominee tribe was terminated by federal law. In 1974, the tribe regained federal recognition and restoration of most of its reservation. Today Menominee County is essentially coterminous with the boundaries of the federally recognized Menominee Indian Reservation.

The county was created from the northeastern portion of Shawano County on July 3, 1959, in anticipation of the termination of the Menominee Indian Reservation in 1961. The reservation status was restored in 1973, and is now co-extensive with the county. 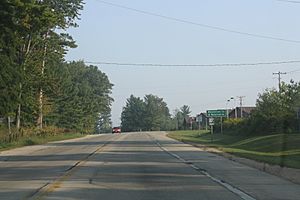 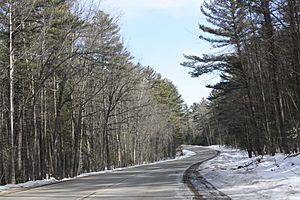 Woods occupy most of Menominee County

Menominee County is one of only two counties in Wisconsin with no incorporated communities, the other being Florence County.

All content from Kiddle encyclopedia articles (including the article images and facts) can be freely used under Attribution-ShareAlike license, unless stated otherwise. Cite this article:
Menominee County, Wisconsin Facts for Kids. Kiddle Encyclopedia.