LEGO® bricks were invented by Danish carpenter Ole Kirk Kristiansen in 1958. The LEGO® employees were often interrupted by visitors who wanted to see what they could build with LEGO bricks. So one day someone came up with the idea to build a park where visitors could build with the bricks. The first Legoland Discovery Center was opened in Berlin in 2007, and since then a total of 12 LEGOLAND® Discovery Centers have been opened. LEGOLAND® Discovery Center Kansas City was opened in 2012. 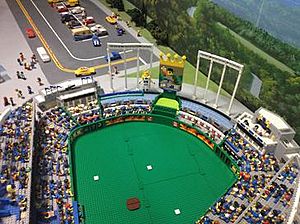 All content from Kiddle encyclopedia articles (including the article images and facts) can be freely used under Attribution-ShareAlike license, unless stated otherwise. Cite this article:
Legoland Discovery Center Kansas City Facts for Kids. Kiddle Encyclopedia.