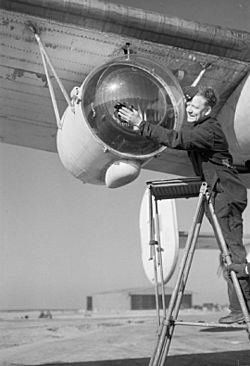 A Leigh Light fitted under the wing of a Consolidated Liberator aircraft of the Royal Air Force Coastal Command, 26 February 1944

The Leigh Light (L/L) was a British World War II era anti-submarine device used in the Battle of the Atlantic. It was a powerful searchlight of 24 inches (610 mm) diameter fitted to a number of the British Royal Air Force's Coastal Command patrol bombers to help them spot surfaced German U-boats at night.

Early night operations with the new Air-to-Surface Vessel radar (ASV) demonstrated that the radar's minimum range of about 1 kilometre (0.62 mi) meant that the target was still invisible when it disappeared off the radar display. Efforts to reduce this minimum were not successful, so Wing Commander Humphrey de Verd Leigh hit upon the idea of using a searchlight that would be switched on just when the target was about to disappear on radar. The U-boat had insufficient time to dive and the bombardier had a clear view of the target.

Introduced in June 1942, it was so successful that for a time German submarines were forced to switch to charging their batteries during the daytime, when they could at least see aircraft approaching.

Germany introduced the Metox radar warning receiver in an effort to counter the combination of ASV and Leigh Light. Metox provided the submarine crew with early warning that an aircraft using radar was approaching. Because the radar warning receiver could detect radar emissions at a greater range than the radar could detect vessels, this often gave the U-boat enough warning to dive. Having expected this, the Allies introduced the centimetric ASV Mk. III radar, regaining control of the battle. Although the German Naxos countered these radars, by this time the U-boat force was already damaged beyond repair.

All content from Kiddle encyclopedia articles (including the article images and facts) can be freely used under Attribution-ShareAlike license, unless stated otherwise. Cite this article:
Leigh Light Facts for Kids. Kiddle Encyclopedia.