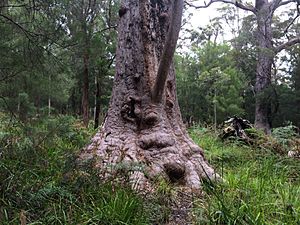 Lepidosperma effusum, commonly known as the riverside sword sedge or spreading sword sedge, is an evergreen species of sedge that is native to southwest Western Australia.

The sedge has a robust and tufted habit typically growing in clumps to a height of 2.5 metres (8 ft) and a width of 2 metres (7 ft). It is rhizomatous and confined to damp areas. It flowers between April and November producing brown coloured flowers.

The species was first formally described by English botanist George Bentham in his Flora Australiensis in 1878.

It occurs along the edges of creeks and streams and around swamps from the Perth region south through the Margaret River region and eastwards to Albany where it grows in sandy or loamy soils.

It has numerous ecological associations including Quokkas who use it as a protective habitat, the Noisy scrub-bird, Australasian bittern and the Red-winged fairy-wren who makes nests from the leaves. Amphibians such as the Nornalup frog (Geocrinia lutea) and Karri frog (Geocrinia rosea) can be heard calling from stands of the sedge. The plant acts as a host for the moths Elachista flavicilia, Elachista effusi and Elachista strictifica. The rare Main's assassin spider Zephyrarchaea mainae is restricted to litter lodged in the crown of L. gladiatum and L. effusum.

Like many sedges it is important to improve water quality it wetlands. The shallow spreading surface roots bind soil and prevent erosion. They form dense stands along foreshores or around wetlands that trap soil and water run-off, which in turn limits the transfer of nutrients into waterbodies. They can accumulate significant amounts of nutrients in stems and rhizomes, and supporting bacterial transformation of nutrients and other pollutants on their extensive root and rhizome mass. This species grows in areas with fresh or brackish water.

All content from Kiddle encyclopedia articles (including the article images and facts) can be freely used under Attribution-ShareAlike license, unless stated otherwise. Cite this article:
Lepidosperma effusum Facts for Kids. Kiddle Encyclopedia.