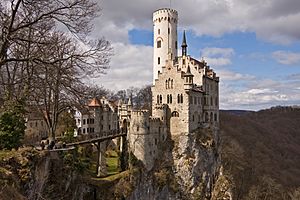 Lichtenstein Castle is a castle near Honau in Swabian Alb, Baden-Württemberg, Germany. The castle is on a cliff. There has been a castle on this land since around 1200. It was destroyed two times. The first time was in the Reichskrieg's War of 1311. The second time was by the city-state of Reutlingen in 1381. The castle was not rebuilt and became a ruin.

In 1802, King Frederick I of Württemberg built a hunting lodge there. In 1837, the land passed to his nephew Duke Wilhelm of Urach, Count of Württemberg. He added the current castle in 1840–42.

Today, the castle is still owned by the Dukes of Urach. It is open to visitors. The castle has a large collection of historic weapons and armour.

All content from Kiddle encyclopedia articles (including the article images and facts) can be freely used under Attribution-ShareAlike license, unless stated otherwise. Cite this article:
Lichtenstein Castle Facts for Kids. Kiddle Encyclopedia.