The Old Bishop's Palace is a historic visitor attraction in the city of Lincoln, Lincolnshire. When it was first built, in the late 12th century, it was at the centre of the vast Diocese of Lincoln, which stretched from the Humber to the Thames. The Palace was one of the most impressive buildings of medieval England, reflecting the power and wealth of Lincoln's bishops. It is situated on a spectacular hillside site, just below Lincoln Cathedral, providing extensive views over the city. The site lies immediately to the south of the Roman wall which had become the medieval defensive wall of the Bail, which enclosed both Lincoln Castle and Lincoln Cathedral. The palace was damaged during the Civil War and subsequently largely abandoned. During the period that followed the Bishop's main residence was Buckden Palace in Huntingdonshire. In 1841, following the reduction in size of the Diocese of Lincoln, the Bishop moved to Riseholme, to the north of Lincoln. This proved inconvenient and Riseholme Hall was sold. In 1886 an older building on the western side of the Palace enclosure was substantially rebuilt and enlarged in a Tudor revival style by the architect Ewan Christian. A further change occurred in 1888 when the architects Bodley and Garner rebuilt and converted the southern portion of the medieval Great Hall into a chapel for the Bishop.

In 1945 it was decided that this Palace was too large and in 1948 the Bishop's residence was moved to Atherstone Place on the north side of the cathedral. The Victorian Bishop's palace subsequently became a Diocesan Retreat centre and since 2009 has been run as the Old Palace Hotel. The ruined parts of the Medieval Palace were placed in the guardianship of the Ministry of Works in 1954, and are now managed by English Heritage. A programme of restoration, excavation and interpretation has been carried out. A modern garden plan was laid out by Mark Anthony Walker, in 2001, and a vineyard re-established in 2012. 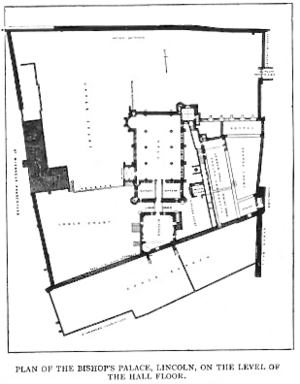 Research on the Bishop's Palace is very dependent on the work of Edward James Willson, who was surveyor to the Dean and Chapter of the Cathedral. Willson produced detailed surveys of the ruins as they stood in the 1840s and related them to architectural fragments from the site. From this Willson, together with his son Thomas who was also an architect, drawings were constructed to show how the palace had appeared in Medieval times. Willson also made extensive use of documents in the Lincoln Cathedral Library and particularly the detailed survey of the Palace produced during English Civil War by the Parliamentary Commissioners in 1647. When taken in conjunction with the engraving made by Samuel Buck in 1726 of the Palace, a good idea can be formed as to the extent of destruction that occurred to the building during this period. Willson presented his findings to The Archaeological Institute of Britain and Ireland on the occasion of their visit to Lincoln in 1848. 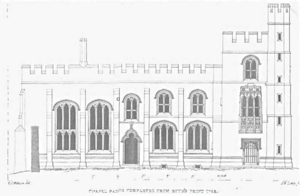 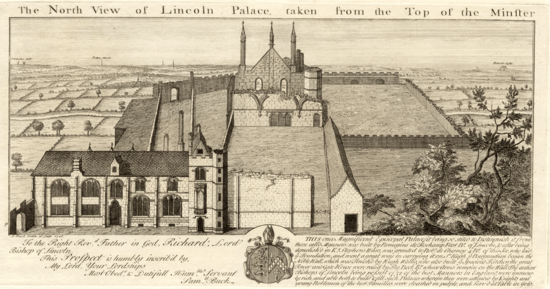 In the 1780s the ruins of Bishop's Palace were recorded in some detail by Hieronymus Grimm, a Swiss artist working for Sir Richard Kaye, the Dean of Lincoln. These drawings show the Palace in an advanced state of decay, before the 19th-century restoration work had begun. These include the a view of the Alnwick tower with the oriel window lacking fenestration and without the present turrets and crenellation. Other views show the west side of the Great Hall and views from the south. One of these, looking towards the Cathedral, shows the house on the left, which was to be converted into the later Bishop's Palace in 1886.

Drawings by Hieronymus Grimm of the Old Bishops’ Palace

The Layout of the Bishop’s Palace

The palace's most notable surviving feature is the East Hall, built over an undercroft by the Burgundian-born Bishop St Hugh of Lincoln and completed in the 1230s. The range of buildings that included an expanded chapel and the tower gatehouse were built by Bishop William Alnwick, (bishop 1436–1450) in the 1430s.

See also: Other Palaces and Residences of the Bishop of Lincoln

All content from Kiddle encyclopedia articles (including the article images and facts) can be freely used under Attribution-ShareAlike license, unless stated otherwise. Cite this article:
Lincoln Medieval Bishop's Palace Facts for Kids. Kiddle Encyclopedia.