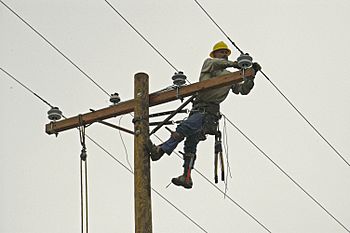 A lineman (American English) or linesman (British English, not to be confused with linesman (soccer)), is a trained tradesman who builds and maintains power distribution and telephone networks and their infrastructure, such as supporting poles and pylons.

The word lineman/linesman refers to those who work in generally outdoor installation and maintenance jobs. Those who install and maintain electrical wiring inside buildings are electricians.

All content from Kiddle encyclopedia articles (including the article images and facts) can be freely used under Attribution-ShareAlike license, unless stated otherwise. Cite this article:
Lineman (technician) Facts for Kids. Kiddle Encyclopedia.