List of The Lion King characters facts for kids 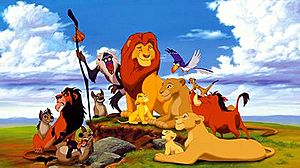 This is a list of characters from the movie series The Lion King. The characters were made by The Walt Disney Company in 1994.

Simba is the main character of the series. He is a lion. In The Lion King, he becomes King of Pride Rock. The character is voiced by Jonathan Taylor Thomas and Matthew Broderick. His name comes from the word for "lion" in Swahili.

Nala is Simba's childhood friend who later becomes his queen. She appears in The Lion King, Simba's Pride and The Lion King 1½. Nala's mother is Sarafina. Nala means "gift" in Swahili.

Scar is the main villain in the movie. He was voiced by Jeremy Irons.

Pumba is a good-hearted warthog in the movie. He usually gossips with the other animals, but then flees with his tail held in the air when things get out of hand.