Lists of marae in New Zealand facts for kids 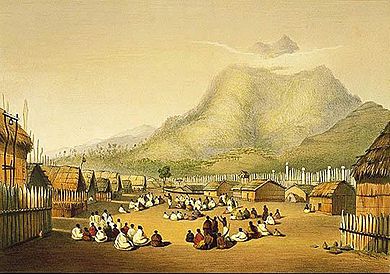 A marae at Kaitotehe, near Taupiri mountain, Waikato district, 1844. It was associated with Pōtatau Te Wherowhero, a chief who became the first Māori king.

The Māori people and Moriori people have 773 tribal marae (meeting grounds) around New Zealand. These grounds usually include a wharenui (meeting house) and are usually affiliated with iwi (tribes) and hapū (sub-tribes).

In Māori society, the marae is a place where the culture can be celebrated, where the Māori language can be spoken, where intertribal obligations can be met, where customs can be explored and debated, where family occasions such as birthdays can be held, and where important ceremonies, such as welcoming visitors or farewelling the dead (tangihanga), can be performed. Like the related institutions of old Polynesia, the marae is a wāhi tapu, a 'sacred place' which carries great cultural meaning.

In Māori usage, the marae ātea (often shortened to marae) is the open space in front of the wharenui (meeting house; literally "large building"). Generally the term marae is used to refer to the whole complex, including the buildings and the ātea. This area is used for pōwhiri (welcome ceremonies) featuring oratory. Some iwi (tribes) and hapū (sub-tribes) do not allow women to perform oratory on their marae. The wharenui is the locale for important meetings, sleepovers, and craft and other cultural activities.

The wharekai (dining hall) is used primarily for communal meals, but other activities may be carried out there.

South Island and other islands

All content from Kiddle encyclopedia articles (including the article images and facts) can be freely used under Attribution-ShareAlike license, unless stated otherwise. Cite this article:
Lists of marae in New Zealand Facts for Kids. Kiddle Encyclopedia.