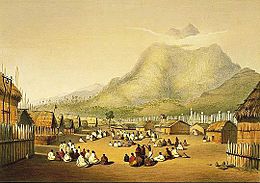 Mount Taupiri is a sacred mountain and burial ground for the Waikato tribe of the Māori people. Until sometime in the 19th century a large Māori village or town, Kaitotehe, stood on the flat land on the other side of the river, below the Hākarimata Range. In early years it was the home of Paoa, brother of Mahuta, before Paoa moved to Hauraki. It became the headquarters of the Ngāti Mahuta people. Brothers Whare and Tapuae, grandsons of Mahuta and the leaders of Ngāti Mahuta, lived there. After the two brothers were killed, Tapuae's son Te Putu built Taupiri pā on the summit of a spur of Taupiri mountain, in the 1600s. When Te Putu was an old man in the 1700s, he was treacherously killed by Ngātokowaru of Ngāti Raukawa at Te Mata-o-tutonga, his home outside the pā by the banks of the Waikato River. He was buried at the pā, which thus became tapu (sacred) and was abandoned. Early European travellers in the area were obliged by Māori to cross to the other side of the Waikato River to avoid the sacred area.

In the early 19th century Kaitotehe was the home of Pōtatau Te Wherowhero, the paramount chief of Ngāti Mahuta who became the first Māori King. English explorer and artist George French Angas visited Kaitotehe in 1844 and painted a scene depicting a hui (meeting) taking place in the village. Taupiri mountain is seen in the background on the other side of the Waikato River (which is not visible below the far palisade). The lower peak on the far right shows signs of the terraces of Te Putu's abandoned pā. To its left, in about the middle of the painting, is a still-lower bush-clad hill, which was the burial ground in Te Putu's time and below which his home of Te Mata-o-tutonga stood.

The present-day burial ground is directly above State Highway 1 and the North Island Main Trunk railway line on a steep slope. Parking and access is difficult, because the road and railway lie largely on land at the foot of the slope that has been reclaimed from the river. Access is being improved by a bridge from the township over the Mangawara Stream, open in May 2020. The deceased Māori kings and queen are buried in the highest part of the cemetery, on the summit where Te Putu's pā stood.

All content from Kiddle encyclopedia articles (including the article images and facts) can be freely used under Attribution-ShareAlike license, unless stated otherwise. Cite this article:
Mount Taupiri Facts for Kids. Kiddle Encyclopedia.