The Little Saskatchewan River is a river in western Manitoba. It originates in Riding Mountain National Park at Lake Audy and flows about 65 miles (105 km) south through the communities of Minnedosa and Rapid City. Its approximate length is 185 km. It joins the Assiniboine River about 6 miles (9.7 km) west of Brandon. The watershed has an area of 1,400 square miles (3,600 km2). The watershed includes numerous lakes and three man made reservoirs (Minnedosa Lake, Rapid City Reservoir and Lake Wahtopanah.

In 1911 the Geographic Board of Canada adopted the name Minnedosa River but restored the original name in 1978. Some early settlers to the area arrived when the river was in flood and thought it was the Saskatchewan River. 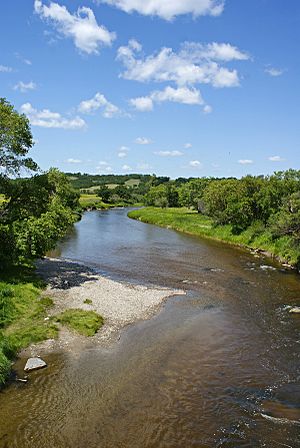 Little Saskatchewan River near its intersection with the Assiniboine River

All content from Kiddle encyclopedia articles (including the article images and facts) can be freely used under Attribution-ShareAlike license, unless stated otherwise. Cite this article:
Little Saskatchewan River Facts for Kids. Kiddle Encyclopedia.