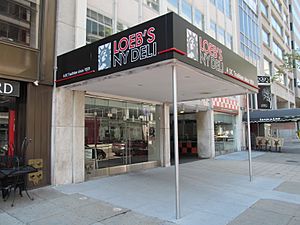 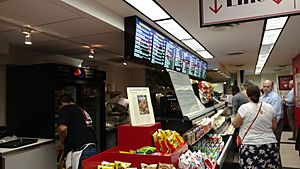 The menu board and counter in the deli

Loeb's NY Deli is a historic kosher-style deli in downtown Washington, D.C., United States. Opened in 1959 by Walter Loeb, the deli was originally located at the corner of 15th and G Streets, NW, in a space currently occupied by the Old Ebbitt Grill. In the 1970s the deli moved to the U.S. Export-Import Bank (Lafayette) building, and was made to move again in 2010 because of a Recovery Act-funded renovation. It is now located at 1712 I Street, and run by Dave, Marlene and Steve Loeb, the children of founder Walter Loeb.

All content from Kiddle encyclopedia articles (including the article images and facts) can be freely used under Attribution-ShareAlike license, unless stated otherwise. Cite this article:
Loeb's NY Deli Facts for Kids. Kiddle Encyclopedia.