Lomaria nuda, commonly known as the fishbone waterfern, is a fern that grows up to a metre tall, and is abundant in rainforest and eucalyptus forests in eastern Australia. The species is placed in the genus Lomaria in the Pteridophyte Phylogeny Group classification of 2016 (PPG I), but is often retained in genus Blechnum as Blechnum nudum.

The fishbone waterfern displays a life cycle typical of ferns. One feature of the Blechnaceae that differs from other ferns is distinct fertile and sterile fronds. While many ferns produce sporangia on the lower surface of fronds, meaning any frond could become fertile, Blechnaceae species have separate fronds for spore production. Aside from this main difference, the fishbone waterfern shows a typical sexual reproductive process to most ferns.

Vegetative growth is another strategy used by the fishbone waterfern to increase in number and size. The fern grows through an underground rhizomic stem, which spreads underground. Fronds emerge from beneath the ground via the stipe. Over time, one plant may spread its underground stems over a great distance. This asexual reproduction is common amongst ferns. 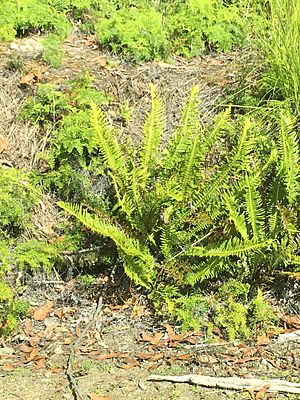 While it grows well in full shade, the fishbone waterfern will thrive in areas of full sun if enough water is available.

The fishbone water fern grows in all Australian states except for Western Australia. In most suitable habitats, this waterfern grows abundantly.

Thus, two suitable habitats are rainforest and wet eucalyptus forest. Both forest types tend to be high rainfall, with a large percentage of canopy cover to ensure shade. Fertile soils allow the waterfern to propagate and become abundant in wet eucalypt and rainforests.

The fishbone waterfern is commonly sold in nurseries as an ornamental plant. Its hardiness and aesthetic qualities combine to make a plant that is popular among gardeners.

All content from Kiddle encyclopedia articles (including the article images and facts) can be freely used under Attribution-ShareAlike license, unless stated otherwise. Cite this article:
Lomaria nuda Facts for Kids. Kiddle Encyclopedia.