Lomatia myricoides , commonly known as the river lomatia, is a shrub native to New South Wales and Victoria in southeastern Australia.

German botanist Karl Friedrich von Gaertner first described this species as Embothrium myricoides in 1807. At the time, Embothrium was a wastebasket taxon to which many proteaceae were assigned. It was given its current binomial name by Karel Domin in 1921. The species name comes from the resemblance of the leaves to those of the genus Myrica. (The suffix -oides means "likeness" in Latin.) Common names include river lomatia, mountain beech and long-leaf lomatia.

Hybrids have been recorded with tree lomatia (Lomatia fraseri) on the Southern Tablelands, with native holly (L. ilicifolia) on the New South Wales south coast, and with crinkle bush (L. silaifolia) on the New South Wales Central Coast and Central Tablelands. Analysis of chloroplast DNA showed that there is extensive hybridization between the five species (L. arborescens, L. fraseri, L. ilicifolia, L. myricoides and L. silaifolia) of mainland southeastern Australia, though each is distinct enough to warrant species status. 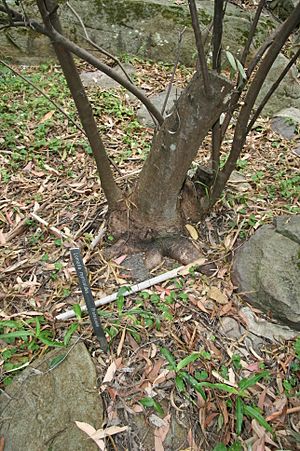 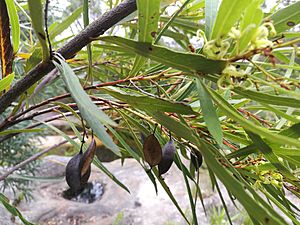 It has a woody lignotuber, from which it regenerates after bushfire. Small ants and flies forage for nectar in the flowers.

Not commonly seen in cultivation, Lomatia myricoides grows in semi-shade in situations with some moisture. It appears to tolerate Phytophthora cinnamomi.

Joseph Maiden reported that its wood was light and hard, and easily worked.

All content from Kiddle encyclopedia articles (including the article images and facts) can be freely used under Attribution-ShareAlike license, unless stated otherwise. Cite this article:
Lomatia myricoides Facts for Kids. Kiddle Encyclopedia.