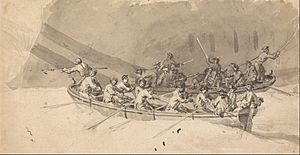 A longboat was a open boat used on-board ships during the age of the sailing ships. The original name was 'Shallop' but was changed to longboat in the 18th century. A ship or vessel would carry several ship's boats for various uses. The most important would be a longboat, an open boat to be rowed by up to eight or ten oarsmen. The longboat had rowing benches designed for up to two men to an oar. A longboat was designed for use in rough water and could be rigged for sails.

One of its main uses was as a pulling boat. Another was to weigh anchor. When a ship was at anchor, longboats carried people and supplies between ship and shore.

All content from Kiddle encyclopedia articles (including the article images and facts) can be freely used under Attribution-ShareAlike license, unless stated otherwise. Cite this article:
Longboat Facts for Kids. Kiddle Encyclopedia.