The Longyear Hall of Pedagogy (also known as just Longyear Hall) was an academic building located on Presque Isle Avenue, on the campus of Northern Michigan University in Marquette, Michigan. It was designated a Michigan State Historic Site in 1972 as part of the Kaye Hall Complex, and individually listed on the National Register of Historic Places in 1980, but was demolished in 1993. 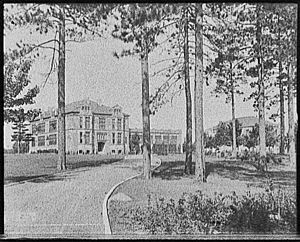 The original Longyear Hall, named for prominent Marquette real estate developer and early Northern Michigan Normal School patron John Munroe Longyear, was constructed in 1900, the year after Northern was founded. This building burned down in 1905. A second Longyear Building, a reconstruction of the original, was built in 1907, based on a design by Battle Creek architect E. W. Arnold. Longyear Hall was used to house administration offices, classrooms, and the library.

The Longyear Hall of Pedagogy was a rectangular two-and-one-half-story structure built with a steel frame sheathed with local Marquette brownstone, with a hipped roof and gabled dormers. The front entrance was topped by a bank of three rectangular windows and flanked by two-story bay windows. A stone beltcourse ran between the first and second stories, and a dentil cornice edged the top of the structure.

All content from Kiddle encyclopedia articles (including the article images and facts) can be freely used under Attribution-ShareAlike license, unless stated otherwise. Cite this article:
Longyear Hall of Pedagogy Facts for Kids. Kiddle Encyclopedia.