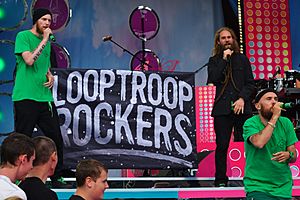 Looptroop Rockers is a reggae, hiphop and electro band from Västerås, Sweden, they sing in both English and Swedish but mostly English. The band's former name was just Looptroop.

The band has 9 albums and some EPs. The members of the group are Promoe, Supreme. Embee and CosM.I.C, the producers is DvsG (David vs. Goliath) and Burning Heart Records. The band were created in 1991 by Promoe and Embee, the band was complete in 1996. Now it’s the biggest Swedish export in Hiphop.

The name Looptroop comes from loops (the beat is repeating over and over till the end of the song) and ‘troop’ stands for Freedom Writers because they sing about the government.

All content from Kiddle encyclopedia articles (including the article images and facts) can be freely used under Attribution-ShareAlike license, unless stated otherwise. Cite this article:
Looptroop Rockers Facts for Kids. Kiddle Encyclopedia.