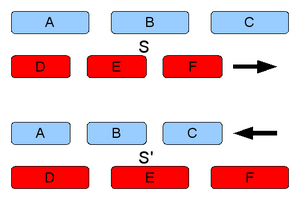 In his book, One, Two, Three...Infinity, physicist George Gamow quoted a limerick (a kind of poem) that is said by some to have been changed from a more naughty poem. There are several other cleaned up versions:

There once was a young man named Fisk,
Whose fencing was extremely brisk,
So fast was his action,
The Lorentz contraction,
Foreshortened his foil to a disk.

All content from Kiddle encyclopedia articles (including the article images and facts) can be freely used under Attribution-ShareAlike license, unless stated otherwise. Cite this article:
Lorentz contraction Facts for Kids. Kiddle Encyclopedia.