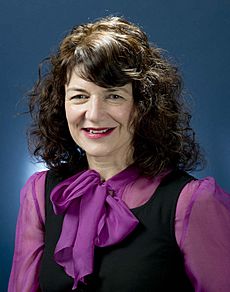 Louise Hand is an Australian diplomat. She is a senior career officer with the Department of Foreign Affairs and Trade.

Before this appointment, Hand was worked for the Department of Climate Change as the Ambassador for Climate Change (2009–2011). Hand has served overseas as Minister and Deputy Head of Mission at the Australian Embassy, Jakarta (2005 to 2009), Ambassador to Cambodia (2000 to 2003), Counselor, Australian Permanent Mission on Disarmament, Geneva (1995 to 1998), and Third (later Second) Secretary at the Australian Embassy in Vienna (1986 to 1989).

Hand holds a Bachelor of Arts and Masters Qualifying degree from the University of Queensland and an MBA from Deakin University. She is married and has two daughters.

In January 2009, she was awarded a Public Service Medal for her work in Indonesia.

All content from Kiddle encyclopedia articles (including the article images and facts) can be freely used under Attribution-ShareAlike license, unless stated otherwise. Cite this article:
Louise Hand Facts for Kids. Kiddle Encyclopedia.