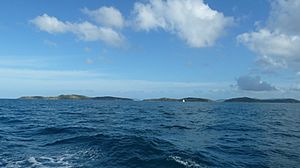 Lovango Cay is a private island of the district of Saint John, in the United States Virgin Islands.

At 118 acres in area, with a highest point of which is 255 feet, Lovango (also known at various times as "Loango" and "Awango") lies one mile northwest of Saint John.

The island has been sparsely inhabited since at least 1728. The peak recorded population was 49 people in 1917, at which point there was briefly a school.

Accessible only by boat, the north side of the cay features a small bay. With Congo Cay to the north, the water here tends to stay calm and offers very good snorkeling. Among other things, nurse sharks are often found resting here during the day.

The south side of the island is popular snorkeling spot for charter boats from St. John and St. Thomas.

All content from Kiddle encyclopedia articles (including the article images and facts) can be freely used under Attribution-ShareAlike license, unless stated otherwise. Cite this article:
Lovango Cay, U.S. Virgin Islands Facts for Kids. Kiddle Encyclopedia.