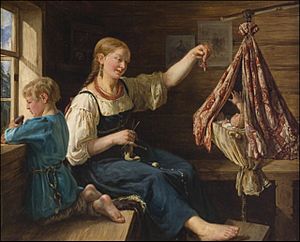 A lullaby, or cradle song, is a soothing song or piece of music, usually played for or sung to children. The purposes of lullabies vary. In some societies they are used to pass down cultural knowledge or tradition. In addition, lullabies are often used for the developing of communication skills, indication of emotional intent, maintenance of infants' undivided attention, modulation of infants' arousal, and regulation of behavior. Perhaps one of the most important uses of lullabies is as a sleep aid for infants. As a result, the music is often simple and repetitive. Lullabies can be found in many countries, and have existed since ancient times.

Lullabies tend to share exaggerated melodic tendencies, including simple pitch contours, large pitch ranges, and generally higher pitch. These clarify and convey heightened emotions, usually of love or affection. When there is harmony, infants almost always prefer consonant intervals over dissonant intervals. Furthermore, if there is a sequence of dissonant intervals in a song, an infant will usually lose interest and it becomes very difficult to regain its attention. To reflect this, most lullabies contain primarily consonant intervals. Tonally, most lullabies are simple, often merely alternating tonic and dominant harmonies.

In addition to pitch tendencies, lullabies share several structural similarities. The most frequent tendencies are intermittent repetitions and long pauses between sections. This dilutes the rate of material and appeals to infants' slower capacity for processing music.

Rhythmically, there are shared patterns. Lullabies are usually in triple meter or 6/8 time, giving them a "characteristic swinging or rocking motion." This mimics the movement a baby experiences in the womb as a mother moves. In addition, infants' preference for rhythm shares a strong connection with what they hear when they are bounced, and even their own body movements. The tempos of lullabies tend to be generally slow, and the utterances are short. Again, this aids in the infant's processing of the song.

Lullabies are often used for their soothing nature, even for non-infants. One study found lullabies to be the most successful type of music or sound for relieving stress and improving the overall psychological health of pregnant women.

These characteristics tend to be consistent across cultures. It was found that adults of various cultural backgrounds could recognize and identify lullabies without knowing the cultural context of the song. Infants have shown a strong preferences for songs with these qualities.

Lullabies are often used to pass down or strengthen cultural roles and practices. In an observation of the setting of lullabies in Albanian culture, lullabies tended to be paired with the rocking of the child in a cradle. This is reflected in the swinging rhythmicity of the music. In addition to serving as a cultural symbol of the infant's familial status, the cradle's presence during the singing of lullabies helps the infant associate lullabies with falling asleep and waking up.

Studies find that gentle music therapy not only slows down the heart rate of prematurely delivered infants but also helps them feed and sleep better. This helps them gain weight and speeds their recovery.

All content from Kiddle encyclopedia articles (including the article images and facts) can be freely used under Attribution-ShareAlike license, unless stated otherwise. Cite this article:
Lullabies Facts for Kids. Kiddle Encyclopedia.