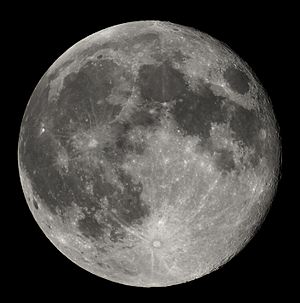 the darker areas in the picture are called Maria

Mare ( (singular: mare) is the name for a great plain on the moon. Several such maria exist. They were formed by ancient volcanic eruptions. The plural form of mare is maria. The Latin word maria means seas. Because of their high amount of iron, they reflects less light than the highlands of moon. So, they appear dark to the naked eye. They are called sea because ancient astronomers looked at the Moon and thought they saw seas and oceans on the Moon. The maria cover about 16% of the surface of the Moon and most of them are in the side of the moon which is visible from Earth. 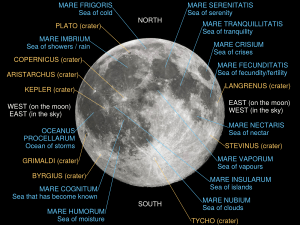 Nearside of the moon with with major maria and craters labeled

All content from Kiddle encyclopedia articles (including the article images and facts) can be freely used under Attribution-ShareAlike license, unless stated otherwise. Cite this article:
Lunar mare Facts for Kids. Kiddle Encyclopedia.