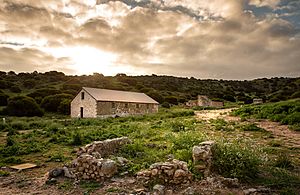 The Lynton Convict Hiring Depot (1853–1857) was the first convict depot north of Fremantle, Western Australia. It was established on 22 May 1853 with the arrival of the 173 ton brigantine Leander, which transferred 60 ticket-of-leave convicts and Pensioner Guards (retired British soldiers) that had arrived at Fremantle on the Pyrenees on 1 May. It was established to supply labour to the Geraldine Lead Mine, 64 kilometres (40 miles) north of the site on the Murchison River, and to local settlers. The depot was closed by order of Governor Kennedy on 3 January 1857 due to the high cost to the government of its maintenance.

By 1856 a store, bakery, depot, lockup, hospital, lime kiln and administration block had all been built but a lack of fresh vegetables had seen the convict population ravaged by scurvy. It was decided to close the settlement and the convicts were transferred with the officer in charge to Champion Bay in 1857. The transfer seems to have been due to the growing importance of the town of Geraldton, and the need for public works in the district.

Five women from the "Bride Ships" were known to have arrived in Lynton.

Lynton remains the most intact example of a regional convict depot in Western Australia. Entered on the Register of the national estate and vested in the Northampton Shire Council, conservation works are in progress via the Northampton Historical Society.

All content from Kiddle encyclopedia articles (including the article images and facts) can be freely used under Attribution-ShareAlike license, unless stated otherwise. Cite this article:
Lynton Convict Hiring Depot Facts for Kids. Kiddle Encyclopedia.