Machinima is a type of animation and digital moviemaking style. It is the use of 3D computer graphics with a 3D video game or computer game to create the 3D animation. The creator who is making the video will record in-game animation and edit it with voice recordings. Machinima can be script-driven, meaning the cameras, characters, and effects are scripted for playback in real time. Unlike other types of animation, the scripting is driven by events and not keyframes.

Machinima limits the controls of other animation types. This is according to Machinima.org. For example, Machinima videos can be shot live or scripted in real time. So it becomes much faster to produce than traditionally animated movies.

Machinima productions can remain close to their gaming roots and feature stunts or other portrayals of gameplay. Popular genres include dance videos, comedy, and drama. Alternatively, some filmmakers attempt to stretch the boundaries of the rendering engines or to mask the original 3-D context. The Academy of Machinima Arts & Sciences (AMAS), a non-profit organization dedicated to promoting machinima, recognizes exemplary productions through Mackie awards given at its annual Machinima Film Festival. Some general film festivals accept machinima, and game companies, such as Epic Games, Blizzard Entertainment and Jagex, have sponsored contests involving it.\

The Making of Machinima

The AMAS defines machinima as "animated filmmaking within a real-time virtual 3-D environment". In other 3-D animation methods, creators can control every frame and nuance of their characters but, in turn, must consider issues such as key frames and in-betweening. Machinima creators leave many rendering details to their host environments, but may thus inherit those environments' limitations. Because game animations focus on dramatic rather than casual actions, the range of character emotions is often limited. However, Kelland, Morris, and Lloyd state that a small range of emotions is often sufficient, as in successful Japanese anime television series.

Another difference is that machinima is created in real time, but other animation is pre-rendered. Real-time engines need to trade quality for speed and use simpler algorithms and models. In the 2001 animated film Final Fantasy: The Spirits Within, every strand of hair on a character's head was independent; real-time needs would likely force them to be treated as a single unit. Kelland, Morris, and Lloyd argue that improvement in consumer-grade graphics technology will allow more realism; For cut scenes in video games, issues other than visual fidelity arise. Pre-rendered scenes can require more digital storage space, weaken suspension of disbelief through contrast with real-time animation of normal gameplay, and limit interaction.

Like live action, machinima is recorded in real-time, and real people can act and control the camera. Filmmakers are often encouraged to follow traditional cinematic conventions, such as avoiding wide fields of view, the overuse of slow motion, and errors in visual continuity. Unlike live action, machinima involves less expensive, digital special effects and sets, possibly with a science-fiction or historical theme. Explosions and stunts can be tried and repeated without monetary cost and risk of injury, and the host environment may allow unrealistic physical constraints. University of Cambridge experiments in 2002 and 2003 attempted to use machinima to re-create a scene from the 1942 live-action film Casablanca. Machinima filming differed from traditional cinematography in that character expression was limited, but camera movements were more flexible and improvised. Nitsche compared this experiment to an unpredictable Dogme 95 production. 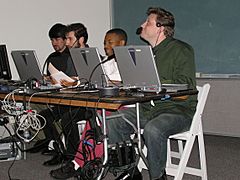 The ILL Clan performs its machinima comedy talk show Tra5hTa1k with ILL Will in front of a live audience at Stanford University in 2005.

Berkeley sees machinima as "a strangely hybrid form, looking forwards and backwards, cutting edge and conservative at the same time". Machinima is a digital medium based on 3-D computer games, but most works have a linear narrative structure. Some, such as Red vs. Blue and The Strangerhood, follow narrative conventions of television situational comedy. Nitsche agrees that pre-recorded ("reel") machinima tends to be linear and offers limited interactive storytelling; he sees more opportunities in machinima performed live and with audience interaction. In creating their improvisational comedy series On the Campaign Trail with Larry & Lenny Lumberjack and talk show Tra5hTa1k with ILL Will, the ILL Clan blended real and virtual performance by creating the works on-stage and interacting with a live audience. In another combination of real and virtual worlds, Chris Burke's talk show This Spartan Life takes place in Halo 2's open multiplayer environment. There, others playing in earnest may attack the host or his interviewee. Although other virtual theatrical performances have taken place in chat rooms and multi-user dungeons, machinima adds "cinematic camera work". Previously, such virtual cinematic performances with live audience interaction were confined to research labs which had powerful computers.

Machinima can be less expensive than other forms of filmmaking. Strange Company produced its feature-length machinima film BloodSpell for less than £10,000. Before using machinima, Burnie Burns and Matt Hullum of Rooster Teeth Productions spent US$9,000 to produce a live-action independent film; in contrast, the four Xbox game consoles used to make Red vs. Blue in 2005 cost $600. The low cost caused a product manager for Electronic Arts to compare machinima to the low-budget independent film The Blair Witch Project, without the need for cameras and actors. Because these are seen as low barriers to entry, machinima has been called a "democratization of filmmaking". Berkeley weighs increased participation and a blurred line between producer and consumer against concerns that game copyrights limit commercialization and growth of machinima.

Comparatively, machinimists using pre-made virtual platforms like Second Life have indicated that their productions can be made quite successfully with no cost at all. Creators like Dutch director Chantal Harvey, producer of the 48 Hour Film Project Machinima sector, have created upwards of 200 films using the platform. Harvey's advocacy of the genre has resulted in the involvement of film director Peter Greenaway who served as a juror for the Machinima category and gave a keynote speech during the event.

Kelland, Morris, and Lloyd list four main methods of creating machinima. From simple to advanced, these are: relying on the game's AI to control most actions, digital puppetry, recamming, and precise scripting of actions. Although simple to produce, AI-dependent results are unpredictable, thus complicating the realization of a preconceived film script. For example, when Rooster Teeth produced The Strangerhood using The Sims 2, a game that encourages the use of its AI, the group had to create multiple instances of each character to accommodate different moods. Individual instances were selected at different times to produce appropriate actions.

In digital puppetry, machinima creators become virtual actors; each crew member controls a character in real-time, as in a multiplayer game. The director can use built-in camera controls, if available. Otherwise, video is captured from the perspectives of one or more puppeteers who serve as camera operators. Puppetry allows for improvisation and offers controls familiar to gamers, but requires more personnel than the other methods and is less precise than scripted recordings. However, some games, such as the Halo series, (except for Halo PC and Custom Edition, which allow AI and custom objects and characters), allow filming only through puppetry. Chris Burke intentionally hosts This Spartan Life in these unpredictable conditions, which are fundamental to the show. Other works filmed using puppetry are the ILL Clan's improvisational comedy series On the Campaign Trail with Larry & Lenny Lumberjack and Rooster Teeth Productions' Red vs. Blue. In recamming, which builds on puppetry, actions are first recorded to a game engine's demo file format, not directly as video frames. Without re-enacting scenes, artists can then manipulate the demo files to add cameras, tweak timing and lighting, and change the surroundings. This technique is limited to the few engines and software tools that support it.

A technique common in cut scenes of video games, scripting consists of giving precise directions to the game engine. A filmmaker can work alone this way, as J. Thaddeus "Mindcrime" Skubis did in creating the nearly four-hour The Seal of Nehahra (2000), the longest work of machinima at the time. However, perfecting scripts can be time-consuming. Unless what-you-see-is-what-you-get (WYSIWYG) editing is available, as in Vampire: The Masquerade – Redemption, changes may need to be verified in additional runs, and non-linear editing may be difficult. In this respect, Kelland, Morris, and Lloyd compare scripting to stop-motion animation. Another disadvantage is that, depending on the game, scripting capabilities may be limited or unavailable. Matinee, a machinima software tool included with Unreal Tournament 2004, popularized scripting in machinima.

When Diary of a Camper was created, no software tools existed to edit demo files into films. Rangers clan member Eric "ArchV" Fowler wrote his own programs to reposition the camera and to splice footage from the Quake demo file. Quake movie editing software later appeared, but the use of conventional non-linear video editing software is now common. For example, Phil South inserted single, completely white frames into his work No Licence to enhance the visual impact of explosions. In the post-production of Red vs. Blue: The Blood Gulch Chronicles, Rooster Teeth Productions added letterboxing with Adobe Premiere Pro to hide the camera player's head-up display.

Machinima creators have used different methods to handle limited character expression. In the Halo video game series, helmets completely cover the characters' faces. To prevent confusion, Rooster Teeth's characters move slightly when speaking, a convention shared with anime. Some machinima creators use custom software. For example, Strange Company uses Take Over GL Face Skins to add more facial expressions to their characters filmed in BioWare's 2002 role-playing video game Neverwinter Nights. Similarly, Atussa Simon used a "library of faces" for characters in The Battle of Xerxes. In some cases, some game companies may provide such software; examples include Epic Games' Impersonator for Unreal Tournament 2004 and Valve Corporation's FacePoser for Half-Life 2. Another solution is to blend in non-machinima elements, as nGame did by inserting painted characters with more expressive faces into its 1999 film Berlin Assassins.

All content from Kiddle encyclopedia articles (including the article images and facts) can be freely used under Attribution-ShareAlike license, unless stated otherwise. Cite this article:
Machinima Facts for Kids. Kiddle Encyclopedia.