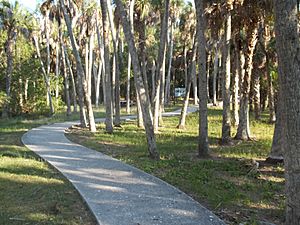 The Madira Bickel Mound State Archaeological Site is an archaeological site on Terra Ceia Island in northwestern Palmetto, Florida, United States. It is located on Bayshore Drive, west of U.S. 19, a mile south of I-275. On August 12, 1970, it was added to the U.S. National Register of Historic Places. It is also a Florida State Park.

The 10-acre (0.040 km2) site was the first Native American location in Florida to be designated as a State Archaeological Site.

Archaeological excavations have established that indigenous occupation reaches back 2,000 years, and across three distinct periods: Manasota, Weedon Island, and Safety Harbor cultures. The people constructed a massive earthwork temple/ceremonial mound from shells, sand and detritus. It is still 20-foot (6.1 m) high, with a base nearly 100 by 170 feet (52 m).

Scholars believe that the mound site continued to be of great ceremonial importance to the historic Tocobaga Indians of the surrounding area, who coalesced as a people before European encounter in the late sixteenth century. They survived into the eighteenth century, but disappeared as a tribe due to infectious diseases and warfare.

The site is named for Madira Bickel of Sarasota. She and her husband, Karl, purchased the land around the main mound and donated it to the state in 1948.

The state park has graduated stairways for access, and at the top, has cleared an area (protected by a fence) for overlooking the park. Over the centuries, the mound has become covered with vegetation, including tall trees.

Also in the park are the remains of the Prine Burial Mound, which is circular, about 40 feet (12 m) wide, and about 2 feet (0.61 m) high at the center. It was used through the three major archaeological cultures described above, from 800-1500 AD. Since settlement and development, much of the mound's contents have been disturbed.

All content from Kiddle encyclopedia articles (including the article images and facts) can be freely used under Attribution-ShareAlike license, unless stated otherwise. Cite this article:
Madira Bickel Mound State Archaeological Site Facts for Kids. Kiddle Encyclopedia.