Her mother, Betsy Curtis, was a science fiction writer, who was nominated for the Hugo Award for Best Short Story in 1969 for her story "The Steiger Effect"; she carried on a long correspondence with colleagues such as Robert Heinlein and L. Ron Hubbard. According to family tradition, Betsy claimed descent from Anne Bradstreet and at least two presidents of Yale University.

Thompson and her late husband and fellow science fiction fan Don Thompson (October 30, 1935 – May 23, 1994) were among the instigators of what developed in the 1960s into comic book fandom.

Their Harbinger (a mimeographed one-sheet published in the autumn of 1960) announced the upcoming publication of Comic Art, one of the early amateur magazines devoted to all aspects of sequential art (a term not then in use). The initial issue of Comic Art was released the following spring. Seven issues were published at irregular intervals between 1961 and 1968. As publication of Comic Art wound down, they shifted their attention to a new venture as the Thompsons started a fanzine titled Newfangles in March 1967. Unlike other comics news fanzines of the time it was devoted to the doings of comics fandom instead of news about comic books and comic book professionals. 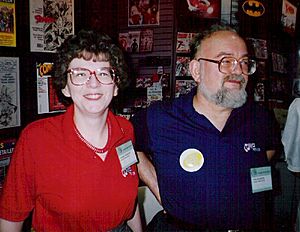 Maggie and Don Thompson at the 1992 San Diego Comic Con

Krause later sold the movie newspaper, but Thompson continued to edit Comics Buyer's Guide, long after her husband's death in 1994 and the transformation of the publication into a monthly magazine. In 2013 she began a column for San Diego Comic-Con International's Toucan blog called "Maggie's World".

Her son Stephen Thompson would go on to become an editor for The Onion and creator of The A.V. Club before moving on to NPR. Stephen co-hosts "Pop Culture Happy Hour", a pop culture-themed podcast on which Maggie has made multiple appearances.

Under Maggie's editorial direction, Comics Buyer's Guide twice won the comics industry's Eisner Award for periodicals, among other awards. She was a recipient of the Bob Clampett Humanitarian Award and was also the first recipient of the Friends of Lulu's "Women of Distinction" Award.

Maggie and Don Thompson were the recipients of many joint awards, including:

All content from Kiddle encyclopedia articles (including the article images and facts) can be freely used under Attribution-ShareAlike license, unless stated otherwise. Cite this article:
Maggie Thompson Facts for Kids. Kiddle Encyclopedia.