It is Aarne–Thompson type 870, the entombed princess. 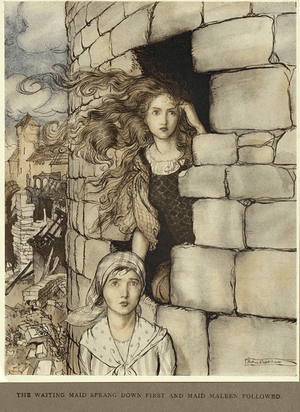 Once there was a princess named Maid Maleen who fell in love with a prince, but her father refused his suit. When Maid Maleen said she would marry no other, the king had her and her maidservant locked up in tower, with food that would be enough to feed them for seven years.

After seven long years, the food eventually ran out, but no one came to release them or deliver more food. The princess and her maidservant then decided to escape from the tower using a simple knife. When they finally managed to break free of the tower, they found the kingdom destroyed and the king long since gone. Without knowing where to go, they finally arrived at the country of Maleen's lover, and sought work in the royal kitchen.

Since Maleen's imprisonment, the prince had been betrothed by his father to another princess. This princess, lacking of confidence in herself, did not think that she would be good enough for the prince. Thus, she would not leave her room and let him see her. On her wedding day, not wishing to be seen, the princess sent Maid Maleen in her place.

All content from Kiddle encyclopedia articles (including the article images and facts) can be freely used under Attribution-ShareAlike license, unless stated otherwise. Cite this article:
Maid Maleen Facts for Kids. Kiddle Encyclopedia.