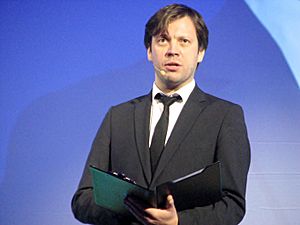 Mait Malmsten (born 6 September 1972 in Viljandi) is an Estonian actor.

Malmsten comes from a family of actors. His father is actor Rein Malmsten. His paternal grandparents were actors Franz Malmsten and Eva Meil. His great-uncle was actor Hugo Malmsten and his great-aunt was actress Lydia Bock.

In 1994 he graduated from the Estonian Academy of Music and Theatre.

Since 1993 he is working as an actor in Estonian Drama Theatre. Besides theatrical appearances he is also played in numerous films and television series, e.g. Wikmani poisid. He is married to actress Harriet Toompere and the couple have two sons, Franz and Hugo, who are also both television and film actors.

All content from Kiddle encyclopedia articles (including the article images and facts) can be freely used under Attribution-ShareAlike license, unless stated otherwise. Cite this article:
Mait Malmsten Facts for Kids. Kiddle Encyclopedia.