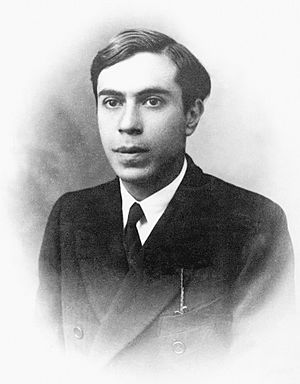 Majorana fermions are named after Ettore_Majorana. This shows him in the 1930s.

Neutrinos do not have an electric charge, and might be Majorana fermions, but their status is unclear

The concept goes back to Majorana's suggestion of 1937. Majorana suggested that neutral spin-1⁄2 particles can be described by a real wave equation (the Majorana equation). The wave functions of particle and antiparticle are related by complex conjugation. For this reason, they would be identical to their antiparticle.

The difference between Majorana fermions and Dirac fermions can be expressed mathematically in terms of the creation and annihilation operators of second quantization: The creation operator

creates a fermion in quantum state

(described by a real wave function), whereas the annihilation operator

annihilates it (or, equivalently, creates the corresponding antiparticle). For a Dirac fermion the operators

are distinct, whereas for a Majorana fermion they are identical. The ordinary fermionic annihilation and creation operators

can be written in terms of two Majorana operators

Extensions to the standard model

There are different extensions of the standard model. One of them is called Minimal Supersymmetric Standard Model. It allows for supersymmetry, and can transform one kind of particle, the bosons, into the other, the fermions. In condensed matter physics, bound Majorana fermions can appear as quasiparticle excitations—the collective movement of several individual particles, not a single one, and they are governed by non-abelian statistics.

All content from Kiddle encyclopedia articles (including the article images and facts) can be freely used under Attribution-ShareAlike license, unless stated otherwise. Cite this article:
Majorana fermion Facts for Kids. Kiddle Encyclopedia.