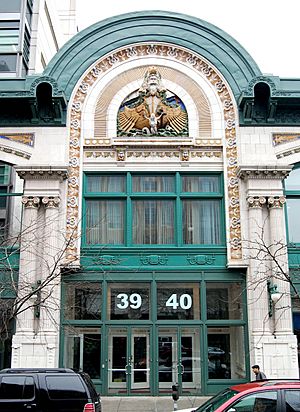 The entrance to the Shabazz Center

The Malcolm X and Dr. Betty Shabazz Memorial and Educational Center is a memorial to Malcolm X and Betty Shabazz located at 3940 Broadway and West 165th Street in the Washington Heights neighborhood of Manhattan, New York City, the building which once housed the Audubon Ballroom, where Malcolm X was assassinated on February 21, 1965. It opened on May 19, 2005, the 80th anniversary of Malcolm X's birth.

The Audubon Ballroom had fallen into disrepair after the 1965 assassination of Malcolm X, and by the mid-1970s it had become the property of New York City. In the early 1980s, Columbia University proposed the construction of a modern biotechnology center on the site, a plan that later grew to include a research park. After community protests and legal attempts by preservationists to save the building, Columbia sought Betty Shabazz's approval for the project. She appealed for the preservation of the ballroom where her husband had been shot, and a compromise was worked out which allowed the building of the biotechnology center, but also preserved and restored the facade of the Audubon Ballroom building, which would be developed into a museum. After a decade of wrangling between the university, the city, and historic preservation organizations, the Audubon Business and Technology Center was completed. Betty Shabazz oversaw the development of the Malcolm X Educational Foundation, which she hoped would host international conferences and educate the public about human rights. Plans for the site briefly stalled after Shabazz's death in 1997, but the scope of the center was expanded and it eventually was completed.

All content from Kiddle encyclopedia articles (including the article images and facts) can be freely used under Attribution-ShareAlike license, unless stated otherwise. Cite this article:
Malcolm X and Dr. Betty Shabazz Memorial and Educational Center Facts for Kids. Kiddle Encyclopedia.