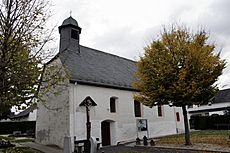 Malmeneich is a village in Hesse, Germany. It belongs to the municipality of Elz. The postal code for Malmeneich is 65604 and its dialing code is 06433. 345 people live in the village.

Malmeneich is in the Westerwald. The average elevation is 250m above sea level. The highest point is in the forest and is 292m high. The average temperature is 9,9°C. The village get between 700-720mm of rain each year. Though this seems moderate, temperatures can vary between -20°C and 35°C.

There was an entry about Malmeneich on the Hessian television in 2002. This was for a project of hr3 which aimed to report about Hessian villages with less than 1000 people living in them.

Every year Malmeneich is mentioned in the regional newspaper because of the "Malmeneicher Kirmes".

At the European elections in 2005, a citizen of Malmeneich was caught after voting five times. He got judged and this crime went through the regional media.

All content from Kiddle encyclopedia articles (including the article images and facts) can be freely used under Attribution-ShareAlike license, unless stated otherwise. Cite this article:
Malmeneich Facts for Kids. Kiddle Encyclopedia.