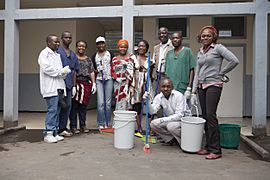 Nelson Mandela International Day (or Mandela Day) is an international holiday in honor of Nelson Mandela who has contributed for world peace and conflict resolution. It is celebrated each year on 18 July (Mandela's birthday). The day was officially declared by the United Nations General Assembly in November 2009.

The first UN Mandela Day was held on 18 July 2010. However, other groups had celebrated Mandela Day the previous year, on 18 July 2009. This was Mandela's 91st birthday. A series of concerts art exhibitions, fundraising and educational events were held. They led up to a concert at Radio City Music Hall.

All content from Kiddle encyclopedia articles (including the article images and facts) can be freely used under Attribution-ShareAlike license, unless stated otherwise. Cite this article:
Mandela Day Facts for Kids. Kiddle Encyclopedia.