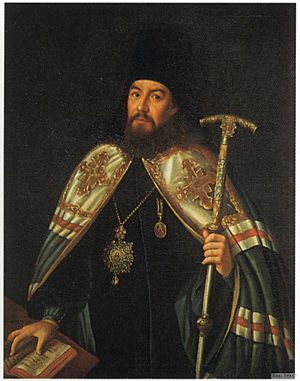 A mantle (Greek: μανδύας, mandyas; Church Slavonic: мантия, mantiya) is an ecclesiastical garment in the form a very full cape which extends to the floor, joined at the neck, that is worn over the outer garments.

In the Eastern Orthodox Church and the Eastern Catholic churches, the mantle is a monastic garment worn by bishops, hegumens, archimandrites, and other monastics in processions and while attending various church services, such as Vespers or Matins; but not when vested to celebrate the Divine Liturgy. Unlike the Western cope, the mantle is worn only by monastics. The klobuk is worn over the mantle.

All content from Kiddle encyclopedia articles (including the article images and facts) can be freely used under Attribution-ShareAlike license, unless stated otherwise. Cite this article:
Mantle (vesture) Facts for Kids. Kiddle Encyclopedia.