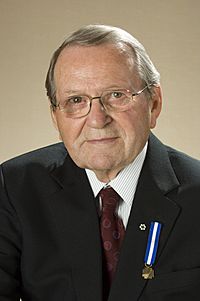 He was a Professor of Anthropology at the Université Laval and was Dean of the Graduate School from 1971 to 1979. From 1981 to 1984, he was the President of the Royal Society of Canada. He was born in Les Éboulements, Quebec. He studied at Université de Montréal, Université Laval, and Cornell University.

All content from Kiddle encyclopedia articles (including the article images and facts) can be freely used under Attribution-ShareAlike license, unless stated otherwise. Cite this article:
Marc-Adélard Tremblay Facts for Kids. Kiddle Encyclopedia.